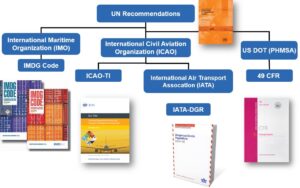 We’ve heard the saying many times, the world is becoming a smaller place.  Fewer and fewer companies have customers only within the country they are headquartered.  Those that do, find themselves interpreting the dangerous goods international regulatory requirements even when shipping an overnight package from one city to another within a country.  Why is that?

When digging deeper, one might find similarities in hazmat shipping regulations between countries.  Some more than others.  When researching dangerous goods airline regulations, the question of what is the difference between ICAO and IATA?  Which set of regulations are used when shipping a cargo container from China to the United States? What is an orange book?

As mentioned earlier, PHMSA is the agency within the US DOT responsible for writing and enforcement of the hazardous materials regulations within the United States.  Each sovereign nation may create and enforce its own set of regulations.  There are many reasons for a country to have regulations that are not harmonized with the rest of the world including national security, infrastructure differences, and attitudes toward safety and the environment.  Most countries, the United States included, work to keep their hazmat regulations harmonized with global regulations for safety and trade.

Changes to the dangerous goods regulations must be announced to the public through a notice in the Federal Register.  PHMSA may publish notices in several forms in the Federal Register.  Advanced Notices of Proposed Rulemaking (ANPRM) are high-level publications of proposed changes to regulations that are intended to get early feedback on upcoming revisions.  Notices of Proposed Rulemaking (NPRM) are draft amendments to regulations that the public can comment on.  Final rules (FR) are amendments to the regulations that will appear in the next edition of the 49 CFR.

The Hazardous Material Regulations (HMR: 49 CFR Parts 100-185) are the regulations to be followed when shipping dangerous goods into, out of, or through the United States.  Most shippers spend most of their time in the 49 CFR in Parts 172 and 173.  It is important to get to know the early sections in the regulations (Parts 100 – 171).  In these sections are found PHMSA’s authority to promulgate and enforce regulations, how to petition PHMSA, investigation information, and information on fines and penalties should things go wrong.  Take a few minutes to look through this often ignored area.

PHMSA also works closely with the authorities of some of the United States’ closest trade partners.

The United Nations Model Regulations on the Transport of Dangerous Goods provide a basis for the development of harmonized regulations for all modes of transport, to facilitate trade and the safe, efficient transport of dangerous goods.  The Model Regulations facilitate compatibility between modal requirements so that a consignment may be transported by more than one mode without intermediate reclassification, marking, labeling, or repackaging.

Member nations, known as the UN Sub-committee of Experts on the Transportation of Dangerous Goods,  meet twice a year to review and vote on proposed changes to the dangerous goods international regulatory requirements.  National authorities and certain interested parties submit papers for review and debate by the sub-committee.  If an agreement can be made, the changes put forth in a paper will be incorporated into the next edition of the Model Regulations.  The Model Regulations are updated every two years.

The ICAO TI are based on the UN Model Regulations.  Nations also publish “State” variations to the regulations that apply to shipments moving in, out, or through the State.

Though the TI are the legal source material for shipping dangerous goods by air internationally, most shippers are more familiar with the IATA Dangerous Goods Regulations (DGR).  The International Air Transport Association (IATA) is an industry group to which most of the world’s airlines are members.  The DGR are based on the ICAO TI with operational considerations incorporated in them.  These considerations often result in more restrictive requirements by airlines for shipping dangerous goods.  To transport dangerous goods on most airlines (even domestic flights), the shipment must comply with the DGR.  For this reason, shippers are more familiar with the IATA DGR than the ICAO TI.

Similar to ICAO, implementation of the IMDG Code is mandated by an international treaty.  More than 150 countries have signed on to the treaty, making 98% of the world’s gross tonnage regulated by the IMDG Code.

The IMDG Code is updated every two years.  Unlike the ICAO TI, there is a one-year transitional period between editions during which either published edition of the Code made be used.  This allows shippers and operators time to become familiar with new requirements.

IAEA publishes regulations for the shipment of radioactive materials.  These regulations are not updated regularly.  When they are updated, they are sent to the UN for incorporation into the Model Regulations.  The IAEA regulations are then adopted by the modal agencies and national authorities.

As you can see, there is an expansive system in place to protect people, property, and the environment from dangerous goods incidents.  The cooperation of nations and the network of trade and industry organizations is vital to keeping commerce moving and the world safe.

Whether it’s the latest hazmat rules and regulations or recurring hazmat certification courses, Hamzat University has you covered! Explore our course menu or reach out to our team at (844) 427-0167 to learn how you and your team can stay confident, competent, and compliant! 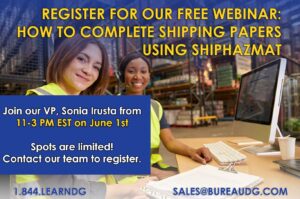 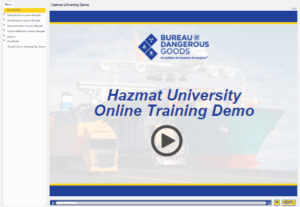